According to some physicists we live in a universe made up of fixed blocks of space-time while defining the change brought on by time in terms of our movement through each successive block. However, it is also possible it is not the result of us moving THROUGH but IN them.

But before we can continue, we must first define what time is.

Some define it only in the abstract saying that is an invention of the human consciousness that gives us a sense of order, a before and after so to speak. However, many physicists define it in terms of the physical properties of a space-time dimension.

Yet, the observable properties of time are something that most of us can agree upon.

One of the most persistent is that it is not directly perceived as matter or space but as a physical, chemical, and biological change in physical space. 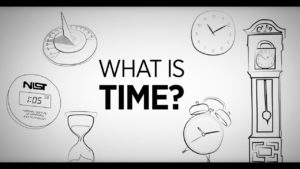 This indicates a unit of time may be measure of sequential ordering of change similar to how a unit of length is measure of the position of an object in space. This is because similar to time, length is perceived only as measurement of where in relation to arbitrary reference point in space an object is located.

However, Einstein defined the energy required for a change in space in terms of a dynamic interaction between space and time.

For example, he defined the change caused by gravity NOT in terms of their rigidity but in terms of a dynamic interaction between them

But in his block universe he did not define change in those terms because according to it each block, with a different spatial configuration already exists and what we perceive as change or the passage of time is caused by our movement THROUGH them.

However, this suggests your birth death and every other moment of your life is out there in space-time waiting for you to arrive.

This also suggests that free will does not exist because your future is etched in a block of space-time waiting for you to move through it and there is nothing you can do to change it.

However, Einstein provided another interpretation for the changes the human consciousness associates with time when he as was mentioned earlier defined gravity in a space-time environment in terms of a dynamic interaction between them. This is because it gives us a physical mechanism for defining the ordering of change.

For example, if one pushes down on its surface, it will change spatial the configuration of the two dots. The change in its surface would be define not only by the distance it move but by the direction.

As was mentioned earlier, Einstein defined gravity in terms of the dynamic interaction between the space and time dimension. For example, the energy of a rocket will change the configuration of the “surface” of three-dimensional space with respect to the time dimension. This means, similar to the balloon one can define that change NOT in terms of the rigidity of space time but in terms of its dynamic properties.

If true as was also mentioned earlier change is a result of a dynamic interaction between space and time it means the future is the result of an interaction of the past with the present and the decisions we make can and do affect the future.

However, another advantage of assuming that is it is that gives us a way to define why human consciousness perceives it to be irreversible in terms of its spatial properties.

For example, if we removed the pressure on the balloon the two dots would return to their original position. However, that removal causes the dots to move in the opposite direction from were when it was applied. Yet even though their positions are indistinguishable from their original ones the dots “living” on its surface would know they had not moved backwards in time because they can observe the sequential ordering of the changes that brought them there. In other words, it would tell them they had not moved backwards in time even though they occupied same points in space.

Putting it another way the sense of order that tells the human consciousness time always moves forward is a result of the fact that consciousness also gives them the ability to observe the order of the spatial changes take place in our environment.

However, assuming it is a measure of the sequential ordering of change ALSO tells us why the laws of physics are NOT reversible with respect to it even though they appear to be. This is because as was mentioned earlier if it is measured from an arbitrary reference point in space the change caused by their reversal will ALWAYS repeat ALWAYS create a new event (with respect to that point) in the sequence of events that returned it to its original configuration.

Therefore, if one accepts time as being a measure of the sequent ordering of a spatial of change in an environment the future or forward movement of it can NEVER repeat NEVER be reversed.

In other words, if we assume the universe is made up a flexible ball of space-time as Einstein’s definition of gravity suggests instead of rigid blocks one can understand how and why the human consciousness perceives sense of order and why we feel time always moves forward even though the laws of physics it MAY not.

1k
Filed under: 1. Predictions | Comments Off on Why the arrow of time is irreversible.
Unifying Quantum and Relativistic Theories is based on WordPress platform.