Dark Matter is a form of matter which is thought to account for approximately 85% of the matter in the universe and the remaining is made up visible or baryonic matter. Its presence is implied in a variety of astrophysical observations, including the gravitational affects it has on the orbits of stars in galaxies which cannot be explained by accepted theories of gravity unless more matter is present than can be seen. The reason it is called dark is because it does not appear to interact with the electromagnetic field, which means it does not absorb, reflect or emit electromagnetic radiation, which is why it is difficult to detect.

However, we DISAGREE that A VAST MAJORITY of it cannot be explained by the accepted theories.  This is because Einstein defined gravity in terms of the “depth” of an energy or gravity well in the “surface” of space-time caused by the energy density of an environment and NOT on the existence of visible or baryonic matter. This means the energy of electromagnetic fields, photons and all other forms of energy along with that associated with visible matter that contribute to its energy density MUST be taken consideration when gravitational potential. 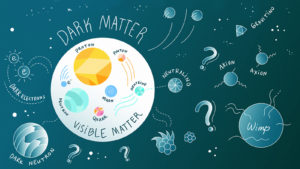 This suggests the reason it does not appear to interact with an electromagnetic field is because a large part of it MAY BE made up of one.

The observation electromagnetic energy prevents the visible matter in stars from collapsing to a black hole supports this conclusion because it tells us its gravitational energy MUST BE oppositely directed with respect to that of visible matter.

Some might say, if true it should have an observable effect on the orbits of planets. The reason it DOES NOT is because it creates an offset in the gravitational field of a solar system which would be equal to the energy it provides

One can understand why by using an analogy of the potential energy of water in well where its level represents the gravitational potential of visible matter and depth the water represents the quantity provided by electromagnetic energy.  One would measure the depth of an object floating on its surface in terms of how far it was below the top of the well while defining the total potential energy of the well by adding to it how far that surface was offset by the water.

Therefore, similar to the example of well mentioned above one would measure the depth of the gravitational potential experienced by a planet “floating” on the “surface” of a solar system in terms of the depth the visible matter is below its top of that “surface” while defining its total gravitational potential by adding to it the offset created in it by the electromagnetic energy contained in a star.

The reason why the existence of dark matter does not APPEAR repeat APPEAR to be as prevalent in spherical galaxies as in spiral ones is in part because spherical pattern of their stars orbits results in the offset that earlier was associated with dark matter to become spread out over a much larger circular volume of space that the one created by the stars in a spiral one. This would result in reducing the dept of the gravity well that as was mentioned earlier associated with dark matter resulting its effect on their obits to be diminished because it is spread out over a larger volume.

Some may say if true a black hole would contain twice the mass or gravitational potential than it does because as was mentioned earlier if electromagnetic energy prevents the visible matter in stars from collapsing to one think it should contribute to that potential when it collapses.  However, it does NOT because its collapse is the result of the electromagnetic energy supporting it being radiated into space therefore it would not contribute to its gravitational potential.

This means according to Einstein the total gravitation potential of the universe must be at least TWICE that contributed by the visible matter of a healthy star.

The remaining Dark Matter may be contained in black holes or interstellar dust particles.  However, the fact we can UNEQUIVOCALLY determine how much of it locked in HEALTHY stars WILL help us determine if it’s are enough account for it or if not, we have to less obvious sources.

For example, electromagnetic energy not only contributes to the gravitation potential of stars as was shown earlier but also to creating it in the interstellar space is moving through and therefore to the total gravitational potential of the universe. Granted the energy of one unit of electromagnetic energy may not contribute much but in large enough numbers they would make up a significant portion of dark matter which would affect the predictions of its future.

It should be remembered; Einstein defined the depth of a gravity well in space in terms of the ABSOLUTE value of its energy density. Therefore, to determine the total gravitational potential of both dark and visible matter one must include all forms of energy to determine its value.