Quantum mechanics states what the universe is made of while not giving an explanation of why it is that way while Relativity gives us an explanation of why it is what it is but does not tell us what is it made of. For example, the quantum world is defined by the mathematical properties of the wave function which defines its interaction with space and time in terms of the evolution of the wave-particle duality of existence and the uncertainty principal which states one cannot precisely measure the properties of Conjugate pairs such as the momentum or position of a particle with complete accuracy. However, it does not give an explanation of what existence is or how it interacts with its environment to create the universe we live in.

On the other hand, Relativity explains the existence of the universe and the particles it contains in terms of an interaction between space and time without telling us what wave-particle duality of existence is or how it interacts with it to create the uncertainty principal. 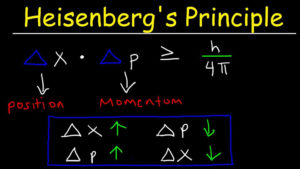 Therefore, to understand the dynamics of the uncertainty principle in terms of space-time we must first establish a physical connection between the mathematical evolution of the wave function and the properties of the space-time. This can be accomplished because in Relativity the evolution of space-time is defined in terms of an electromagnetic wave while, as was mentioned earlier the wave function defines how a quantum environment evolves to the point where it is observed.

This commonality suggests the wave function could be a mathematical representation of an electromagnetic wave in space-time.

(Einstein defined the medium responsible for the propagation an electromagnetic wave through space-time when he derived gravitational energy in terms of a curvature in it. This is because it shows the alternating physical curvatures caused by peak and valleys of a wave through its geometry can support its movement.)

One can connect them because the science of wave mechanics and Relatively tells us an electromagnetic wave moves continuously through space-time unless it is prevented from moving through time by someone or something interacting with it. This would result in it being confined to three-dimensional space. The science of wave mechanics also tells us the three-dimensional “walls” of this confinement will result in its energy being reflected back on itself thereby creating a resonant or standing wave in three-dimensional space. This would cause the energy of an electromagnetic wave to be concentrated at the point in space were a particle would be found. Additionally, wave mechanics also tells us the energy of a resonant system such as a standing wave can only take on the discrete or quantized values associated with its fundamental or a harmonic of its fundamental frequency that the wave function associates with a particle.

(The boundaries or “walls” of its confinement would be defined by its wave properties. If an electromagnetic wave is prevented from moving through time it will be reflected back on itself. However, that reflected wave still cannot move through time therefore it will be reflected back creating a standing wave. The wave itself defines its boundaries because if it cannot move though time it MUST STAND in place in the form of a standing wave called a photon.)

As was mentioned earlier the mathematical properties of the wave functions defines the evolution of a quantum system in terms of its wave particle duality. However, as was shown above one can understand why if one assumes that it represents an electromagnetic wave in a space-time because if it is prevented from evolving through space by an observation it presents itself as a particle.

Yet, it also tells us why, similar to the evolution of an electromagnetic wave if unobserved it will continue evolve through the mathematical universe defined by quantum mechanics.

Next, we must explain how quantum mechanics definition of a particle in terms of a one-dimensional point is responsible for the validity of the uncertainty principal.

Relativity and the science of wave mechanics tell us the energy of the standing wave which earlier defined a particle would be distributed over a volume of space-time that corresponds to is wavelength. However, to accurately determine its momentum or position one must be able to determine where those measurement are taken with respect to energy volume of the system it occupies.

Yet, to measure momentum of a particle in the quantum world one must determine time it takes to move between two points in the mathematical field with respect to the volume of system being measured. Therefore, they will be an inherent uncertainty if one cannot determine where with respect to it those points are.

The fact that both of these theories assume that energy or information of a system can nether be created or destroy provides the basis for the connecting the uncertainty principal to the space-time environment of relativity.

Quantum mechanics defines both momentum and position with respect to a one-dimensional point in the mathematical field of the wave function. However, the accuracy of the information as to where that point is in relation to its information volume is directly related to how much of it is taken from the system. This means the more accurate the measurement the more information regarding it must be removed from the system and the less is available to measure the other component of its Conjugate pair

This shows how one can understand and physically connect the uncertainty principal as defined by quantum mechanics to the space time environment define by Einstein.

1k
Filed under: 1. Predictions | Comments Off on Understanding the dynamics of the uncertainty principle in terms of space time
Unifying Quantum and Relativistic Theories is based on WordPress platform.