Physics is an observational science and therefore we must be careful to base our theoretical models directly on observationsÂ and notÂ allow the members of our community to ignore them when submitting their theories to us.

For example, many feel the most reliable way to determine the age of our universe is by measuring its expansion rate base on the radial velocities of galaxies determined by the redshift in their light.Â Using that value, they imagine â€œrewindingâ€ the universe to the point where everything was contained in a singularity, and calculate how much time must have passed between that moment (the Big Bang) and the present.Â Doing so tells us the universe is approximately 13.77 billion years. 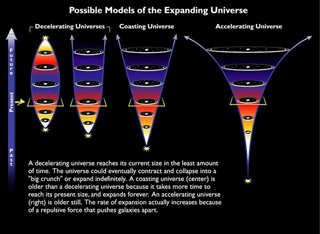 But there is a problem because there are other things which would affect the redshift which were not taken into consideration when calculating its age.

For example, an observer watching an event like a star orbiting a black hole would notice that light coming from it is redshifted by its intense gravitational field.

In other words, since we can observe how gravity influences redshift, we also know that not taking its effects into account would make radial velocity of galaxies appear to be higher than it was thereby making the universe appear younger than it is.

This discrepancy is amplified by the fact most if not all evolutionary models of our expanding universe assume its gravitationally density increases as one goes back in time because its decreasing size causes its matter component to become more concentrated.

As was mentioned earlier, it has been observed light emanating from just above the event horizon of black hole is redshifted by its intense gravitational field. This means we know from direct observations the magnitude of the redshift coming from galaxies will increase as we go back in time due to the differential gravitational potential between the universe’s past and the present.Â This also means by not taking into account that gravitational redshift would mean that we have overestimated the speed of the components of the universe and therefore underestimated its age.

In other words, because the gravitational differential between the past and the present was not taken into consideration the universe MUST be older than 13.77 billion years when determined by the redshift.

There can be no other conclusion if one accepts the observations which verify a redshift can be caused by gravity and the fact that the gravitational density must have been greater in the past than it is now due to its expansion.

Some might say that because the density of the gravitational field expands along with the universe it would not affect redshift of light.Â However, Einstein’s theory of Relativity tells us all change, including that associated with the universe expansion is not a result of anything moving through time but in time.Â This concept is sometime represented by what is called a block universe where each event would be represented by a ridge block of space-time which never changes.

In other words, the changes that occur in the universe as it expands are a result of movement though each ridge block of space-time and not by changes in that block . Therefore, if one accepts Einstein theory the gravitational density of the early universe is still there exerting its influence on light from when it was emitted from the galaxy used to determine it age.

Note: we are not only taking about the gravity of a galaxy that existed when the light was emitted but the total gravitational potential of the universe that light is required to overcome as it travels from the past to the present.

One could make a better estimate of the universe’s age than the one we have now have if one could determine the total gravitational potential the universe had in the beginning. This would help us to determine how much of the redshift is a result of the radial velocity of galaxies and how much was a result of gravity.

The Cosmic background radiation may give us a way to do this because most assume the slight temperature variations across it tells how matter was distributed at the time it was emitted.Â  One can use the magnitude those density differentials to determine how each part interacted with its neighbors to produce that distribution. This may permit us to estimate how much matter is represented by one of these temperature variations by using Einstein’s field equationsÂ get an approximate value for the total mass and gravitational potential of the universe had at that time.

This would allow one to subtract the redshift caused by the differential gravitational potential at its origin of the visible universeÂ with respect to what it is now toÂ determine actual the radial velocity of galaxies and thereby a more accurate measure of its age.

However, the fact the universe MUST be older than 13.77 billion years based on observation of how gravity effects the redshift presents problems for some of the proponents of the inflationary big bang model because they have said that observation of the Cosmic background radiation have confirmed that is exactly how old it is.

To put it in the words of the European Space Agency

Planckâ€™s superbly precise new picture of the CMB (below) shows remarkable agreement with theoretical work, confirming that observations fit a simple cosmological model defined by just six numbers. (Take that in for a moment: the whole physical universe is described by six numbers.) (and) “When combined with other types of measurements, the that data homes in on an age for the universe of 13.798 billion years, give or take a mere 0.037.”

Additionally, they tell us “Our inflationary model makes specific predictions about what this complex graph should look like. As you can see, Planckâ€™s observations (red dots) trace nigh perfectly the theory (green line). My colleague Alan freaked out when he saw the tight fit at the graph’s far right â€” you donâ€™t appreciate the wonders of scientific progress until you have a 6-foot-3 man jumping up and down in your office.

However, as was shown above the universe must be older than 13.77 billion years because the effects gravity has on the redshift were not taken into account when considering its age.

In other words, very fact thatÂ those (red dots) trace perfectly Alan’s theoretical prediction that the universe is 13.77 billion years old invalidates it because as was just mentioned it MUST be older than that.

As was motioned earlier, Physics is an observational science and therefore we, in the physics community must not allow our members to ignore ones that we know will eventually will invalidate their theories.Â This is because their inevitable downfall not only reduces our creditability but also slows the progress to a better understanding of how the universe really functions.Â  This is in part because governments and the public will be less willing to fund the research of those who have a chance to succeed after spend large sums of money on those that are doomed to failure because their authors chose to ignore the observations that WILL eventually invalidate their theories.