As the Scientific American article “Is Gravity Quantum?” tell us quantum mechanics suggests everything is made of quanta, or packets of energy, that can behave like both a particle and a wave as define in terms of the mathematics of the the wave function. For instance, quanta of light are called photons. Detecting gravitons, the hypothetical quanta of gravity, would prove gravity is quantum. The problem is that gravity is extraordinarily weak and therefore detecting them is extremely difficult. 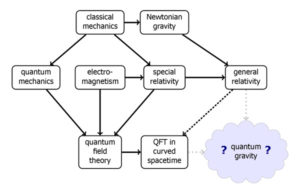 Einstein, on the other hand defines gravity terms of the a curvature in space-time caused by its energy density while using light or the properties of electromagnetic waves in the equation E=mc^2 to define the mass equivalent of the energy.

(Einstein defined the medium responsible for the propagation an electromagnetic wave through space-time when he derived gravitational energy in terms of a curvature in it. This is because it shows the alternating physical curvatures caused by peak and valleys of a wave through its geometry can support its movement.)

One can accomplish this by using the science of wave mechanics and the concepts of Einstein’s theories to define both the energy density of space responsible of gravity and the particle properties of mass and the graviton as defined by quantum mechanics in terms of an electromagnetic in space time.

For example, the science of wave mechanics along with the fact Relatively tells us the energy of an electromagnetic wave moves continuously through space-time unless it is prevented from doing so by someone observing or something interacting with it. This would result in its energy being confined to three-dimensional space. The science of wave mechanic also tells us the three-dimensional “walls” of this confinement will result in its energy being reflected back on itself thereby creating a resonant or standing wave in three-dimensional space. This would cause its wave energy to COLLAPSE thereby increasing the energy density at the point where that collapse occurred. Additionally, wave mechanics also tells us the energy of a resonant system, such as a standing wave can only take on the discrete or quantized values associated with its fundamental or a harmonic of its fundamental frequency. Therefore any changes in that energy density must also be quantized.

This shows if one assumes the wave function is a mathematical representation of an electromagnetic wave in space-time one can explain quantum gravity and why its is made of gravitons or quanta of energy in terms of physical properties of space time. This is because, as was show above if an electromagnetic wave is prevented from moving through it either by being observed or interacting with something its energy collapses to what quantum mechanics calls graviton. This would make a quantum increase in the energy density of space where the collapse occurred and therefore would make a quantum increase the curvature in space-time that relativity defines as the gravity. Additionally it tells us the curvature in space time which Relativity defines as being the causality of gravity is not continuous but quantized because the energy density that creates its can only be increased or decreased in the quantized units defined by the mathematics of the wave function.