An alternative explanation for the variations in the cosmic background radiation
28 November 2020, jeffocal @ 12:08 pm
Please follow and like us:

In the 1950s, there were two competing theories regarding the origin of the universe.

The first or the Steady State Theory was formulated by Hermann Bondi, Thomas Gold, and Fred Hoyle. It postulated that the universe was homogeneous in space and time and had remained that way forever.

The second is called the Big Bang theory, which is based on the observations made by Edwin Hubble in 1929 that the universe was expanding.

However, a few physicists led by George Gamow a proponent of the big bang model showed an expanding universe meant that it might have had its beginning in a very hot infinitely dense environment, which then expanded to generate the one we live in today.

They were able to show only radiation emitted approximately 300,000 years after the beginnings of its expansion should be visible today because before that time the universe was so hot that protons and electrons existed only as free ions making the universe opaque to radiation. It was only after it cooled enough due to is expansion to enable protons and electrons to join did it become visible. This period is referred as the age of “recombination”. 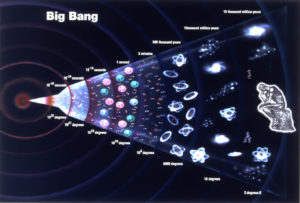 Additionally, they predicted this Cosmic Background Radiation or what was left over from that period would have cooled form several thousand degrees Kelvin back when it was generated to 2.7 today due to the expansion of the universe.

The conflict between the Steady State and Big Bang Theory was resolved when it was discovered by Penzias and Wilson in 1965 because it showed the temperature of the universe had changed through time, which was a direct contradiction to the Steady State Model”.

But the existence of galactic clusters and the variations in the intensity of the cosmic background radiation discovered by NASA’s WMAP and more recently the European Space Agency Planck satellite showed the universe was not homogeneous either now or at the time when the Cosmic Background Radiation was emitted.

However, there is an alternative explanation for the variations or “anisotropy” in the cosmic background radiation that NOT based on quantum fluctuations.

We still have not been able to determine if the universe will continue to expand indefinitely or if it will eventually collapse in on itself. But if it did collapse the heat generated could provide another explanation for the variations in the Cosmic Background other than quantum fluctuations if it was enough to cause protons and electrons to become ionized again. This is because the radiation pressure caused by the heat of its collapse would result in it again expanding and cooling which would enable protons and electron to again rejoin creating another age of “recombination”

This suggest that the variations in the CBM MAY NOT be due to any quantum phenomena as is suggested by the Big Bang hypothesis but by an unevenness of the collapse of a previous universe.

Many proponents of the Big Bang hypothesis have ALSO suggested it is the only model that can accurately predict abundance of the light-elements in today’s universe. This is because both theory and observation have led astronomers to believe the mechanism responsible for creating the lighter elements (namely deuterium, helium, and lithium) occurred in the first few minutes after the Big Bang before the CBM was emitted, while the heavier elements are thought to have their origins in the interiors of stars which formed much later in the history of the universe.

However, the abundance of those light elements would be dependent on rate the universe expanded and the temperature profile at each point in it. Yet because as was mentioned earlier they are unable to observe what happened before the CBM many use the observation of their abundance in today’s universe IN PART to help them define the conditions responsible for their creation. Therefore, the reason why the big bang hypothesis CAN verify the abundance of the light-elements in today’s universe MAY be because it was used (in part) to determine those conditions.

However, as was mentioned earlier one could use observations of our present universe to estimate if and when the heat generated by the momentum of its collapse would become great enough to cause it to expand.

If it was found that it was great enough to cause protons and electrons to exist only as free ions before the radiation pressure caused it to enter an expansion phase then another round CMB would be emitted.

Yet this also means one could use the observable properties of our present universe to estimate the expansion rate and temperature at each point in its history even before the CBM was created. This would allow one derive a mechanism that is responsible for the abundance of the lighter elements that would be based on observations which would be independent of what is it is now.

Putting it another way, there is another explanation of the “anisotropy” in the Cosmic Background Radiation other than quantum fluctuations and the abundance of the lighter elements other than the one promoted by the Big Bang theory that is testable based on observations of our present universe which DOES NOT includ them in defining their creation.

1k
Filed under: 1. Predictions | Comments Off on An alternative explanation for the variations in the cosmic background radiation
Unifying Quantum and Relativistic Theories is based on WordPress platform.