Presently, there is disconnect between our understanding of one of the most mysterious facets of quantum mechanics, that of quantum entanglement and the classical one of separation.

Entanglement occurs when two particles are linked together no matter their separation from one another. Quantum mechanics assumes even though these entangled particles are not physically connected, they still are able to interact or share information with each other instantaneously.

Many believe this means the universe does not live by the law’s classical laws of separation or those derived by Einstein which state that no information can be transmitted faster than the speed of light. 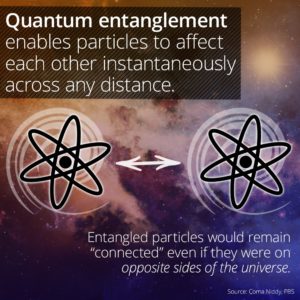 However, we must be careful not to jump to conclusions because Einstein gave us the definitive answer as to how and why some particles, such as photons are entangled while others are NOT in terms of the physical properties of space-time.

Quantum mechanics assumes that entanglement occurs when two particles or molecules share on a quantum level one or more properties such as spin, polarization, or momentum. This connection persists even if you move one of the entangled objects far away from the other. Therefore, when an observer interacts with one the other is instantly affected.

There is irrefutable experimental evidence the act of measuring the state of one of a pair of particles can instantaneously affect another even though they are physically separated from each other.

However, before we come to the conclusion it is a result of their quantum mechanical properties, we should first examine the experimental setup and any variables that may allow us to come to a different conclusion.

(This description was obtained from the Live Science web site) One of the experiments many assume verifies that entanglement is a quantum phenomenon uses a laser beam fired through a certain type of crystal which causes individual photons to be split into pairs of entangled photons. The photons can be separated by a large distance, hundreds of miles or even more. When observed, Photon A takes on an up-spin state. Entangled Photon B, though now far away, takes up a state relative to that of Photon A (in this case, a down-spin state). The transfer of state (or information) between Photon A and Photon B takes place at a speed of at least 10,000 times the speed of light, possibly even instantaneously, regardless of distance. Scientists have successfully demonstrated quantum entanglement with photos, electrons, molecules of various sizes, and even very small diamonds).

However, Einstein told us there are no preferred reference frames by which one can measure distance.

Therefore, he tells the distance between the observational points in a laboratory, can also be defined from the perspective of the photons in the above experiment.

However, from that perspective his Theory of Special Relativity tells us the distance separating the end points of ALL observations made in a laboratory would contract along the direction of motion relative to a photon. Yet, it also tells us that the separation between those two points would be zero form the perspective of all photons moving at the speed of light.

(Some have suggested that if you have two photons moving in opposite directions, you can only treat one as being stationary at a time, not both simultaneously” However that directly contradicts relativity because it means that from the perspective of the stationary one the lab where a measurement is made is moving at the speed of light away from it while the other one is moving at the speed of light in the opposite direction from the lab. However, that means the second photon is moving at twice the speed of light from the perspective of the first one. That is a direct contradiction of relativity because it would mean that they could transmit information between themselves at twice the speed of light.  The only way to resolve this issue is to view the relativistic properties of each photon individually.

For example, Einstein’s math and observations tell us the time moves slower when an object is in relative motion and stops if it is moving at the velocity of light. Therefore each photon because it is moving at the speed of light would view time to have stopped at the point were they were entanglement even though they are moving in opposite directions.  Therefore, because from their perspective time has stop the information they carry would not change no matter how far apart they might be.  I think this is the definition of entanglement.   The same would be true if you looked at it from the perspective of length contraction.  Einstein’s math tells us that the length contracts to zero from the perspective of anything moving at the speed of light.  This means each photon even thought they are moving in the opposite direction would view the distance between the endpoints of the measurements as being zero.  Therefore, all photons which originate from the same point will be entangled because from their perspective the distance between the end point of the measurement will be zero.

One would come to the same conclusion if they are viewed in terms of their light cones because the base of the cone expands at the same velocity as the photons are moving away from their point of origin.  Therefore, they will always be casually connected or entangled no matter how far apart they might be from that point.

Therefore, according to Einstein’s theory all photons which are traveling at the speed of light are entangled no matter how far they may appear to be from the perspective of an observer who is looking at them.

In other words, entanglement of photons can be explained and predicted terms of the relativistic properties of space-time as defined by Einstein as well as by Quantum Mechanics.

One way of verifying if this is correct would be to determine if particles which were NOT moving at the speed of light experience entanglement over the same distances as photons do.

This is because, the degree of relativistic shortening between the end points of the observations of two particle is dependent on their velocity with respect to the laboratory where they are being observed.

Therefore, if it was found that only photons experience entanglement when the observation points were separated by large distances while others that are not moving at the speed of light do not it would support the idea that it is a result of the relativistic properties of space defined by Einstein and not by their Quantum mechanical properties.

However, one must remember the wave particle duality of existence as defined by Quantum mechanics tell us that before a particle is observed it has an extended length due to its wavelength. Therefore, all particles will be entangled if the reduction in length between the endpoints of the observations when adjusted for their relative velocity is less their wave length as defined by quantum mechanics.

A more conclusive argument could be made for the idea that entanglement is a result of the relativistic properties of space if it was found that entanglement ceased if the relativistic distance between the end points of observation when viewed from the perspective of particle moving slower than the speed of light was greater than its wavelength as defined by quantum mechanics.