There are two ways primary ways Quantum computers are different from conventional ones The first it uses qubits which can exist in a superposition of multiple states to process information instead binary bits of zeros or ones.

For example, in a standard computer two bits can hold one of four values at any time: “00,” “10.” “01,” and “11.” Therefore, at 2 billion operations per second, a standard 64-bit computer would take around 400 years to cycle through all its possible values.

Qubits, on the other hand, can hold a zero, a one, or any proportion of both zero and one at the same time. An array of qubits can use superposition to represent all 2^64 possible values at once, allowing a quantum computer to solve problems that are practically impossible for standard computers.

The second is Entanglement which defines the physical relationship between two or more qubits in which one qubit seems to know what happens to another, even when they are a large distance apart. Entangled qubits become a system with a single quantum state. If you measure one qubit (i.e., collapse its superposition to a single state), you will have the same impact on the other qubits in the system. 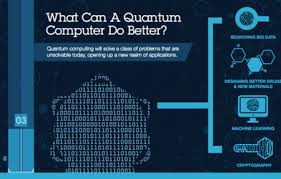 In quantum computers, changing the state of an entangled qubit will change the state of the paired qubit immediately, therefore, entanglement improves the processing speed of quantum computers and according to research, it is necessary for a quantum algorithm to offer an exponential speed-up over classical computations.

The fact that entanglement exists has been experimental proven beyond a shadow of a doubt.

However, one must be careful not to make HASTY assumptions as to why because knowing more about the physical properties of the operating environment of a device can greatly streamline the design of everything from transistors in modern computers to the Qubit in a quantum computer.

In 1935, Einstein co-authored a paper with Podolsky–Rosen which came to be called the EPR Paradox. Its intent was to show that Quantum Mechanics could not be a complete theory of nature.

He began his argument by assuming that there are two systems, A and B (which might be two free particles), whose wave functions are known. Then, if A and B interact for a short period of time, one can determine the wave function which results after this interaction via the Schrödinger equation or some other Quantum Mechanical equation of state. Now, let us assume that A and B move far apart, so far apart that they can no longer interact in any fashion. In other words, A and B have moved outside of each other’s light cones and therefore are spacelike separated.

As was mentioned earlier the FACT that photons are entangled has been proven. However, one must be careful not to extrapolate the unique properties of a photon like the fact that they are the only particle that moves at the speed of light to other ones that might be used to create a qubit.

We believe Einstein, Podolsky, and Rosen were aware of this SPECIAL PROPERTY of photon because they specified in the introduction to their experiment “two systems, A and B (which might be two free particles)” NOT just photons because they knew that Special Relativity gives us a reason why they would be entangled which were different from those given by quantum mechanics.

Einstein told us the observe distance between the measurement of the end points of objects or particles in motion would be relativity shorter in direct relationship to their velocity from the perspective of an observer who is measuring how far they have traveled. In other words, the faster particles are moving relative to the observers the distance they have traveled will appear to be shorter than they measure it to be.  Additionally, his math tells us that distance will be zero for any object or particle moving at the speed of light.

However, he also told us that due to the relativistic properties space and time there is no special reference frame by which one can measure distance. Therefore, one would be justified in measuring the distance between the end points of the observation from the perspective of the photons as well as from the laboratory environment where they are being observed.

This tells us from ALL photons because they are moving at the speed of light will be entangled because from their perspective the distance they have traveled with respect to ALL human observers in the universe no matter where they are MUST be is zero.

As was mentioned earlier the fact that entanglement exists has been experimental proven beyond a shadow of a doubt with respect to a photon.

However, as was show above Einstein Theory of Relativity provides an alternative explanation as to why with respect to photons, which is just a valid as the one provided by quantum mechanics.

Since as was mentioned earlier it is one of the foundational concepts of quantum computing knowing which one of them is responsible will give engineers a better understanding its strengths and limitations and will hopefully allow them to design systems that will take better advantage of them.

HOWEVER, IT DOES NOT MEAN THAT A QUANTUM COMPUTER CANNOT BE MADE even if entanglement is a relativistic property of space because the physical properties of all particles such as spin can overlap or be entangled even if their physical properties overlap.  For example, the de Broglie wavelength which defines a particle length in terms of its wave length tells us that all quantum entities would be entangled if the distance between them is less than that value. Therefore, any particles that are closer to each other than that would be entangled.

(There is an experimental way to UNAMBIGUOUSLY determine if entanglement is a result of the relativistic or a quantum property of space.  This is because if it was found entanglement ceased when the relativistic distance between the end points of an observation when viewed from the perspective of a particle moving slower than the speed of light was greater than its De Broglie wavelength as defined by quantum mechanics, it would have a tendency to verify that conclusion. If not, it would indicate that it is a result of its quantum properties.)

This suggests designers MAY BE more successful in creating a quantum computer if they chose particles with the longest De Broglie wavelength for their Qubits and position them as closely as possible to increase the overlap of their wave properties.