One of the biggest problems is cosmology is accurately determining how far distance objects are away from us.

In 1998 researchers discovered the repulsive side of gravity when they discovered a discrepancy in apparent brightness of light from type 1A supernovae, which exploded billions of years ago suggested that it had traveled a greater distance than theorists predicted it should.Â From that they concluded that the expansion of the universe is actually speeding up, not slowing down. This was such a radical finding that some cosmologists suggested that the falloff in supernova brightness was the result of other affects, such as intergalactic dust dimming the light. In the past few years, though, astronomers have solidified the case for cosmic acceleration by studying ever more remote supernovae. 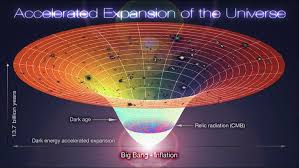 But there is something else other than dust which would affect the measurement of theirÂ distance.

For example, Einstein tells us and observations of black holes confirm that light losses energy and becomes dimmer as it exits or “climbs” out of a gravitational field.

In other words, the assumption that one can accurately determine the distance of an object based solely using its luminosity and its apparent brightness is simply wrong.

Most of if not all theoretical models of the universe assume that it evolved from a gravitationally denser environment than it is it now.

Therefore, we would expect light that was emitted from an exploding star billions of years to grow fainter due the differential gravitation potential as it leaves the past and enters the instruments used by today’s researchers to measure its apparent brightness.

Note: we are not taking about the gravity of the star that exploded billions of years in the past but the total gravitational potential of the universe that light is required to overcome as it travels from the past to the present.

Some might say that the because the density of the gravitational field expands along with the universe it would not affect apparent brightness of light from the type 1A supernovaes use in the above study.Â However, Einstein tells us all change, including that associated with the universe expansion is not a result of anything moving through time but in time.Â This concept is sometime represent by what is called a block universe where each event would be represented by a ridge block of space-time which never changes and the changes that occur in the universe as it expands are a result of movement though each ridge block and not by changes in in that block of space-time. Therefore, if one accepts Einstein theory the environment were1A supernovae exploded billions of years is still there exerting its gravitational influence from billions of light years away when observed in1998.

This means the discrepancy in the light found in 1998 may not only be due to the distance it traveled but to the energy lose it experiences is due to the differential gravitational potential that exits between its point of origin and where is was observed.

The simple fact is that the conclusion the universe expansion is accelerating must be reconsidered if they did not take into account the effect of the differential gravitational density between then and now had on light as it moved through space.