Recently observations have suggested a force called Dark Energy is needed to account for the fact the expansion of the universe is accelerating. However. that may be an illusion created by the effect gravity has on time.

Einstein told us and it has been observed the rate at which time is perceived to move is slower in all environments where the gravitational potential is greater with respect where it is being observed. This means the further we look back in time, where universe gravitational potential of the more densely pack matter was greater the estimate of its rate of expansion would be less than it actually was if those effects were not taken into consideration. In other words, if one had not considered the Relativistic slowing of time caused by its gravitational potential that rate would be faster in the past than the present value suggests. 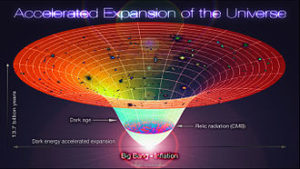 Putting it another way, the rate of universe’s expansion would to appear to occur more rapidly than it actually did from the perspective of present due to the effect gravity has on time while its actual rate would decline due to its gravitational potential as the universe expands.

Therefore, to determine its actual rate of expansion at each point in its history one must not only take into account the gravitational effect on time that would make it appear that it was slower that it actual was but one must also consider how gravity actually causes its expansion rate to decrease.

Yet, because of the non-linear effects between the slowing of time created by universe’s gravitational potential with respect to effects it has on its rate of expansion there will be a point in its history where one will APPEAR to overtake the other.

IN OTHER WORDS, IT IS POSSIBLE THE OBSERVATIONS SUGGESTING THE UNIVERSE EXPANSION IS ACCELERATING MAY BE THE RESULT OF THE FACT THE GRAVITATIONAL POTENTIAL OF THE UNIVERSE CAUSES TIME TO APPEAR MOVE SLOWER IN THE PAST THAN IT ACTUALLY DID.

This gives us a way of validating if the gravitational potential and the slowing effect it has on time is what gives us the IMPRESSION the expansion of the universe is accelerating because it has been observed that about 4 billion years ago the universe’s expansion appears to have change from decelerating to an accelerated phase.

This because one can calculate its actual expansion rate by determining how much time would have appeared to move slower due to the differential gravitational potential between the past and present and use that value to determine its actual rate. If it was found that about 4 billion years ago the effect the slowing of time on our perception of its past expansion rate is less than slowing effect gravity would have on, it would appear as if that rate was accelerating even though it was still decelerating.