Recently it has been suggested a force called Dark Energy is needed to account for the observations suggesting the universe’s expansion is accelerating. However, there is another reason which is related to effect gravity has on time.

Einstein told us and it has been observed the rate at which time passes is perceived to be slower in all environments where the gravitational potential is greater with respect where it is being observed. This means the further we look back in time, where the gravitational potential of the universe’s was greater due to the more densely pack matter, the estimate of its rate of expansion would be slower than it actually was if that were not taken into consideration.

However, we also know the gravitational potential has a slowing effect on the universe’s expansion and because that potential decreases as its volume increase, the rate of that slowing also decreases. 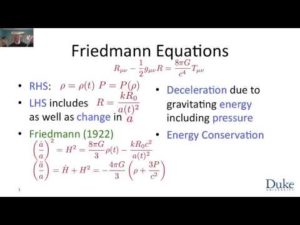 This means the rate of its expansion would be faster than it appeared to be from the perspective of present due to the effects gravity has on time while its actual rate of slowing would be declining due to its decreasing gravitational potential as it expands.

Yet, because of the non-linear effects between the slowing of time created by universe’s differential gravitational potential and the effects it has on its rate of expansion there will be a point in its history where one will APPEAR to overtake the other.

IN OTHER WORDS, IT IS POSSIBLE THE OBSERVATIONS SUGGESTING ITS EXPANSION IS ACCELERATING MAY BE THE RESULT OF THE EFFECTS ITS GRAVITATIONAL POTENTIAL HAS ON TIME WHICH WOULD CAUSES IT TO APPEAR MOVE SLOWER IN THE PAST THAN IT ACTUALLY DID.

One could verify this conclusion by using the observation that about 4 billion years ago the universe’s expansion appears to have change from decelerating to an accelerated phase. This is because one could derive its actual rate of expansion in the past by using Einstein equations to determine how much time would have been slowed due to the differential gravitational potential between the past and present. If it was found that about 4 billion years ago that actual rate of expansion was faster than it is now it would suggest that the its expansion is NOT accelerating

Some have also suggested Relativistic properties gravity has on time already been already been accounted in the Friedman model that was used in part by scientist to define the accelerated expansion of the universe. However, that is NOT the case because when someone in the past measures its rate of expansion he or she would NOT need to use the slowing effects gravity has on time because his entire spatial slice of the universe would be at the same gravitational potential. However, this would NOT be the case for someone looking at it from the future. He would have to use it because due to its expansion a differential gravitational potential would have developed between the past and present. Yet as was mentioned earlier the effects gravity has on time tell us from the perspective of the present its expansion rate would be moving slower than it actually was from the perspective of someone who is present at the time when that expansion was taking place. In other words, since Friedman’s equation does not consider the effects the differential gravitational density has on time it would predict it to be slower in the past than it actually was.

1k
Filed under: 1. Predictions | Comments Off on Is Gravitational time dilation responsible for Dark Energy?
Unifying Quantum and Relativistic Theories is based on WordPress platform.