Quantum electrodynamics (QED) is the relativistic quantum field theory of electrodynamics.  In essence, it describes how light and matter interact and is the first theory where full agreement between quantum mechanics and special relativity is achieved. QED mathematically describes all phenomena involving electrically charged particles interacting by means of exchange of photons and represents the quantum counterpart of classical electromagnetism giving a complete account of matter and light interaction. 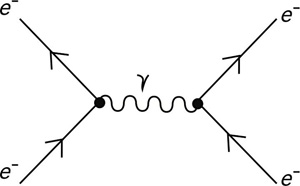 However, as of yet no one has been able to integrate gravity into its theoretical structure.

Yet one can use the wave properties of a quantum field to explain how Einstein’s definition of gravity in his General Theory of Relativity can be used to accomplish that.

Therefore, to incorporate Quantum field into Einstein General Theory of Relativity one must explain how the interaction of a photon with electrically charge particles causes a distortion in space-time associates with gravity.

However, one can use the wave definition of that quantum field to define how it interacts with field properties of Einstein General Theory of Relativity to create the distortion in space-time that defines gravity.

The existence of four-dimensional space-time would give an energy wave the ability to oscillate spatially on a "surface" the third spatial dimension with respect to the time dimension thereby fulfilling one of the requirements for classical resonance to occur.

These oscillations would be caused by an event such as the decay of a subatomic particle or the shifting of an electron in an atomic orbital. This would force the "surface" of a three-dimensional space manifold to oscillate with the frequency associated with the energy of that event.

The oscillations caused by such an event would serve as forcing function allowing a resonant system or "structure" to be established space.

Therefore, these oscillations in a "surface" of a three-dimensional space manifold would meet the requirements mentioned above for the formation of a resonant system or "structure" in four-dimensional space-time if one extrapolated them to that environment.

Classical wave mechanics tells us the energy of a resonant system can only take on the discrete or quantized values associated with its fundamental or a harmonic of its fundamental frequency.

Hence, these resonant systems in four-dimensional space-time would be responsible for photonic properties of a quantum field.

Yet one can also define how and why an electromagnetic wave interacts with charge particles terms of the physical properties of space-time to create the resonant structure associated with photonic properties of a quantum field.

However, the edge of the paper provides a boundary that reflects those oscillation back on itself, thereby creating a resonant wave on the surface of the paper.

Similarly, an electromagnetic wave in three-dimensional space would be confined to it however, it could, similar to the surface of the paper oscillate “up” or “down” while moving through time.

However, if it is prevented from moving thought time by interacting with an electrically charged particle its wave energy will be reflected back on itself, thereby concentrating it in a resonant standing wave on the "surface" three-dimensional space with respect to the time dimension.

In other words, one can integrate gravity with Quantum electrodynamics definition of how matter interact with light in terms of how that interaction results in increase the energy density in the volume of space-time where that interaction takes place.

1k
Filed under: 1. Predictions | Comments Off on Incorporating gravity into Quantum electrodynamics
Unifying Quantum and Relativistic Theories is based on WordPress platform.