Physics is an observational science and therefore we must be careful to base our theoretical models on those observations and make sure the theoretical predictions we make using them conform to them.

For example, the “Big Bang” the most widely accepted theoretical model of the universe’s beginning assumes it was an extremely hot dense environment which cooled as it expanded making conditions just right to give rise to the building blocks of matter, the quarks and electrons of which we are all made and later quarks aggregated to produce protons and neutrons. Within minutes, these protons and neutrons combined into nuclei. As the universe continued to expand and cool, things began to happen more slowly. It took 380,000 years for electrons to be trapped in orbits around nuclei, forming the first atoms. These were mainly helium and hydrogen, which are still by far the most abundant elements in the universe. Present observations suggest that the first stars formed from clouds of gas around 150 to 200 million years after the Big Bang. 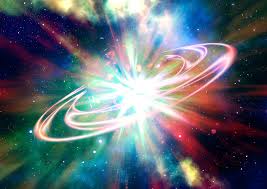 But there is a problem because that estimate is based on the assumption that the passage time is constant throughout the universe’s evolution while Einstein and observations tell us that moves slower wherever gravity is stronger.

For example, an external observer watching an event like an object falling into a black hole would notice that its motion toward it slows as it approached its event horizon due to the density of its gravitation field.

As was just mentioned, the big bang model assumes based on observations that the first stars formed from clouds of gas around 150 to 200 million years after the Big Bang.

However, that assumes time was moving at the same speed for both the evolution of those passed events and for those who are observing it from the present.

Yet, Einstein and the observation of events happening near a black hole, regarding the affect gravity has on time tell us something different.  They tell us the timing of events must have moved faster when the universe young than it does from the perspective of present-day observers because, due to its expansion the matter and gravitational density was greater back then than it is now.

In other words, defining the time between events at the beginning of our universe must be based not only on the observations made today but on relative strength of gravity between present day observers and what it was at the time they are observed.

This tells us an event that appears to a 150 to 200 million years to occur from the perspective of an observer in the present would not have taken that long if viewed by someone who was present when it occurred.

It is important to remember this slowing of the timing of events is not related to the velocity of the expansion of the universe but directly to relative strength of gravity between the observed and what he is observing at the time the event occurred.

Some might try to claim that this would not be the case because gravity was also expanding at the same rate the universe and therefore it would not effect how long it would take for events to occur. However, if we are truly looking back in time to when the event occurred, we must assume that the conditions we observed are not change by its expansion because that would mean the future can change the past.

As was mentioned earlier the big bang model tells the first stars formed from clouds of gas around 150 to 200 million years after the Big Bang.

However, as was shown above they could not have taken long if they were observed in the environment where they were forming because of the effect’s gravity has on time. This means, for the big bang model to remain a viable explanation of the universe evolution it must not only revamp the time line for their formation but the time lines for the future events that were based on the theoretical model suggesting they formed 150 to 200 million years after the Big Bang.

Some proponents of the Big Bang model may try to deny that there any difference between the timing of events from the perspective of an observer looking them from present and past even while telling us that the gravitational density was stronger in the past.

That would be hard for them justify that conclusion because we have observed, as was mentioned earlier a denser gravitational field cause time and therefore the timing of events to move slower from the perspective of an outside observer. Additionally, it is one of primary predictions of the General Theory of Relativity which they used to define the formation and evolution of stars and the large-scale structures we observe in today’s universe.

This means they would have to not only deny that gravity has been observed to effect time but the validity the General Theory of Relativity because it unequivocally states that it must. However, as was just mentioned they used it to define the theoretical structure of the Big Bang model.

In other words, the only way they can justify the validity of Big Bang model of the universe’s evolution would be to show that it can explain the observable structures of the present universe in terms of the formation of the first stars occurring in something other than 150 to 200 million years after the Big Bang.

Unfortunately, there are no other choices.