This question is especially relevant for the scientists who struggle on daily basis to help us understand the “inner” reality of our universe.

Some define it based on a quantitative mathematical analysis of observations.

For example, Quantum mechanics defines the “reality” or the state of a quantum system in terms of the mathematical probability of finding it in a particular configuration when a measurement is made. However, defining reality in terms of probabilities means that each probabilistic outcome of an event becomes a reality in the future.  This is why some proponents of quantum mechanics assume the universe splits into multiple realities with every measurement. 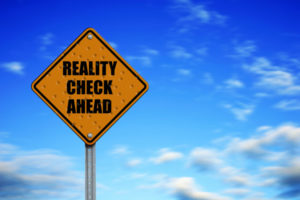 This also may be why Niels Bohr, the father of Quantum Mechanics said that

“If quantum mechanics hasn’t profoundly shocked you, you haven’t understood it yet.”

However, others define reality in terms of deterministic proprieties of cause and effect.

For example, Isaac Newton derived the laws of gravity by developing a causal relationship between the movement of planets and the distance between them.  He then derived a mathematical equation, defining a reality which could predict their future movements based on observations of their earlier movements.

Both the wave function of quantum mechanics and Newton’s gravitational laws are valid definitions of reality because they allow scientists to predict future events with considerable accuracy.

However, this does not mean that they accurately define the environment responsibility for those realities.

For example, at the time of their discovery Newton’s gravitational laws allowed scientists to make extremely accurate predictions of planetary movements based on their previous movements, but they did not explain why those those laws exist.

However, Einstein, in his General Theory of Relativity, showed there was room for an “alternative reality” that could explain them in terms of a distortion in space-time.  However, it did not alter or change the validity of Newton’s gravitational laws when the velocities were small with respect to the speed of light, they are still valid.

This shows, just as there was room for an alternative “reality” which could explain Newton’s laws there could be one that defines the predictive powers of quantum probabilities that would not affect the validity of those predictions.  This is true even though many physicists feel there is no room for alternatives because modern experiments, combined with quantum theory’s mathematics give us the most accurate predictions of events that have ever been achieved.

As mentioned earlier quantum mechanics defines reality in terms of probabilities, which means each probabilistic outcome becomes a reality in the future.  However, it also means one must assume separate realities are created for the possible outcomes of every event.

However, this would not be true if those probabilities can be derived in terms of an interaction between a quantum system and the physical properties of the universe.

For example, when we role dice in a casino most do not think there are six of them out there waiting for the dice to tell us which one we will occupy after the roll.  This is because the probability of getting a six is related to or caused by its physical interaction with the properties of the table in the casino where it is rolled.  In other words, what defines the reality getting a six is not the probability of getting one but physical properties of how the dice interacts with casino it occupies.  Putting it another way. the probabilities associated with a roll of the dice does not define the casino, the casino defines those probabilities.

As was mentioned earlier many proponents of quantum mechanics assume the universe splits into multiple realities because it describes the interactions of a quantum system with the universe in terms of probabilities, rather than definite outcomes.  This means there must a separated universe for all possible outcomes of an event.

However, even though the reality that appears when a dice is rolled in a casino can be determined in terms of a probably does not mean all possibilities appear in their own separate casino. This is because as was mentioned earlier the probabilities involved in the roll of dice does not define the reality of the casino but that the casino defines those probabilities.  In other words, the fact that casino define the probability of the role of dice tells us that it will have definite outcome in the casino

Similarly, just because quantum mechanics describes the interactions of a quantum system in terms of probabilities, we should not assume they define the reality of the universe because it is possible the universe defines those probabilities.

This also shows how one defines reality depends on if all you care about is that a six appears on the roll of dice or if you want know why you rolled it.

1k
Filed under: 1. Predictions | Comments Off on How should we define reality?
Unifying Quantum and Relativistic Theories is based on WordPress platform.